Tristana. A typeface for Buñuel

When: From october 17th to november 11th

This exhibition presents a collaboration project between some of the best current typographers and the Zaragoza School of Design to create a typography in homage to Luis Buñuel. The project is subsidized by the Government of Aragon.

The workshops have been given by typographers and designers as relevant as Martin Majoor, Iñigo Jerez, Jordi Embodas, Fabrizio Schiavi and Mario Piazza, of whom a selection of works can be seen on the top floor.

The ground floor explains the production process and shows the final result of the typography, as well as works by the collaborating typographer Pedro Arilla. 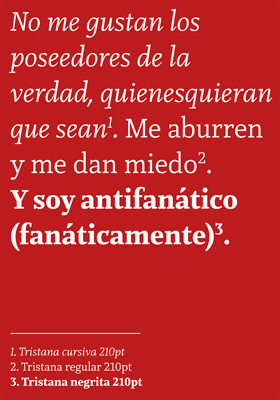 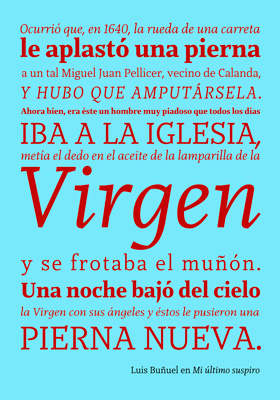 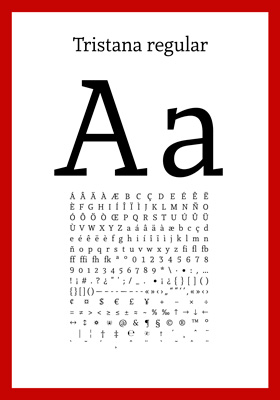 Although we consume typography constantly, there are few projects of typographic development in our country. The theoretical models that allow us to evaluate the quality and legibility of the letters are so solid that we can think that typographies already exist to solve all design eventualities.

But each typography has a voice, a tone, a way of being, which turns it into a resource to generate identity. This project has used this potential to generate a versatile, useful, expressive and quality typographic solution linked to Buñuel.

The happy confluence of several questions has made possible this project for the development of a typography in public education, Tristana, which we present here today: The support of Manuel Estrada, the commitment of the Government of Aragon to the project, an economic endowment that has allowed us to call the best typographers, and a group of five enthusiastic and constant students, in love with typography and determined to work and learn a lot.

The result, Tristana, is a very pampered typography, very well thought out, on which the great typographers we have been lucky enough to count have poured their knowledge. It is a choral typography of which all of us who have participated in one way or another feel proud.

Personally it has been a privilege to participate in this experience. For all that we learned, for the good result obtained, but also because I, who was an unbeliever, I have been excited that the most improbable things can happen, that everything is possible.

This experience shows that when there is will and decision there are no limits. It is the first time that something like this has happened, I hope it will not be the last.

The «Tristana» typeface (2018) is the proud result of a unique collaboration between 5 graphic design students from the Escuela Superior de Diseño de Aragón (ESDA) in Zaragoza. This new typeface was commissioned by the Government of Aragon and is a tribute to Luis Buñuel, revolutionary filmmaker and leading figure in the surrealist movement.

«Mystery is the essential element of any work of art,» Buñuel once said. However, a typeface like «Tristana,» intended to be used as a serious font style for texts, does not belong to the field of the arts, but to the field of applied arts. «There is nothing mysterious about «Tristana», it is an original typography, with clear, very legible and well-balanced forms. The italic that accompanies it looks strong and confident.

It is always a challenge to collaborate on a complex project such as creating a typeface, especially when no fewer than five designers are involved. Fortunately, the designers didn’t try to design a «surreal» typeface, which would have been a mistake. And instead, they managed to create a coherent, legible font.

«Tristana» (named after Buñuel’s 1970 film) can be seen as a valid typeface for any type of work. On the other hand, we find a lot of striking details in «Tristana», such as the open forms in B, P and R, or the distinctive vertical ends in capital letters and numbers.

Such a small but essential character as the Spanish virgulilla needs special attention. Although rooted in early Spanish historical forms, the Ñ of «Tristana» has a mysterious, almost surreal form, and the fact that it can be found in the name of Buñuel does not seem a coincidence, can be seen as a true tribute to such a respected filmmaker of Aragon.